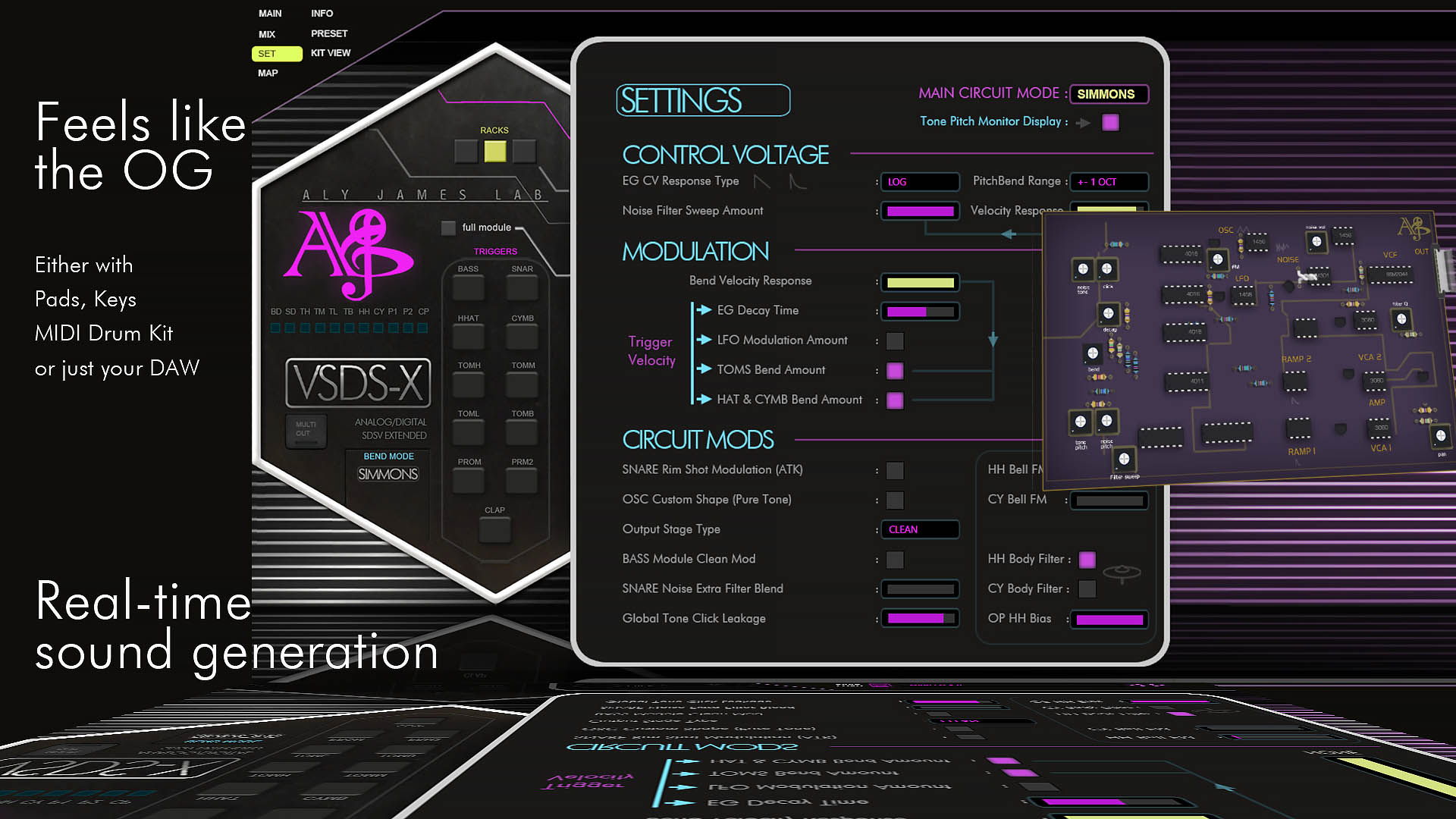 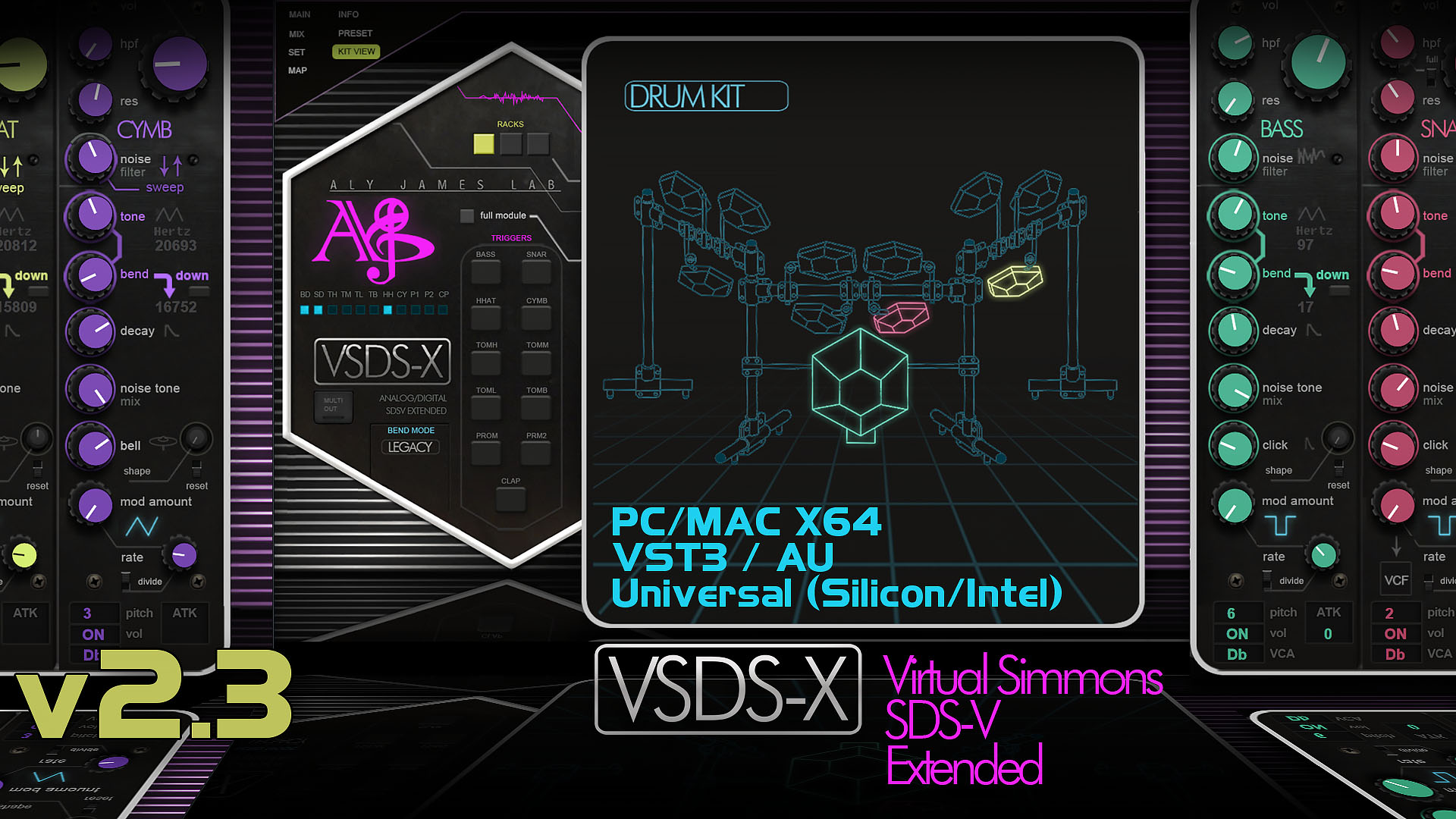 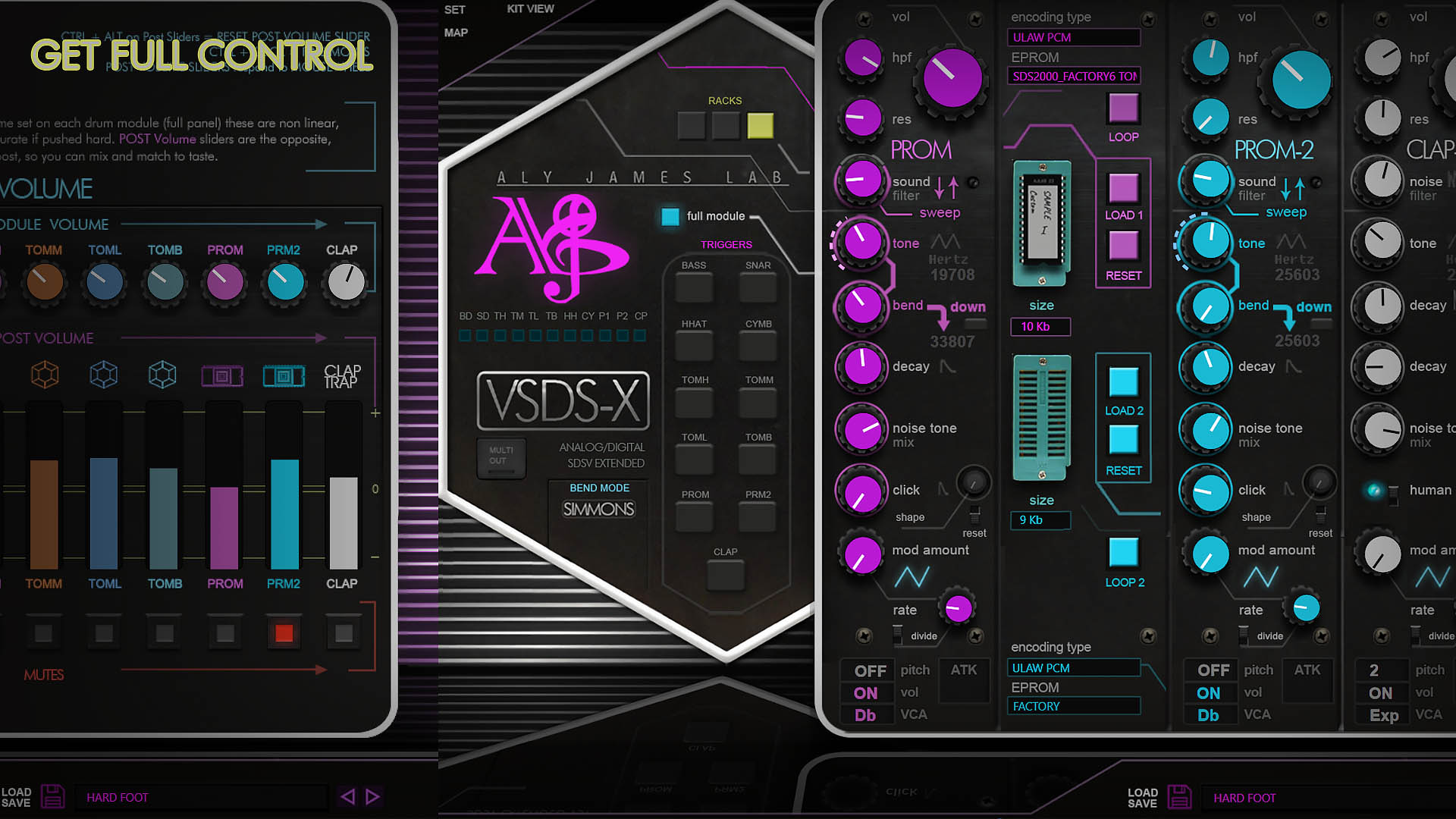 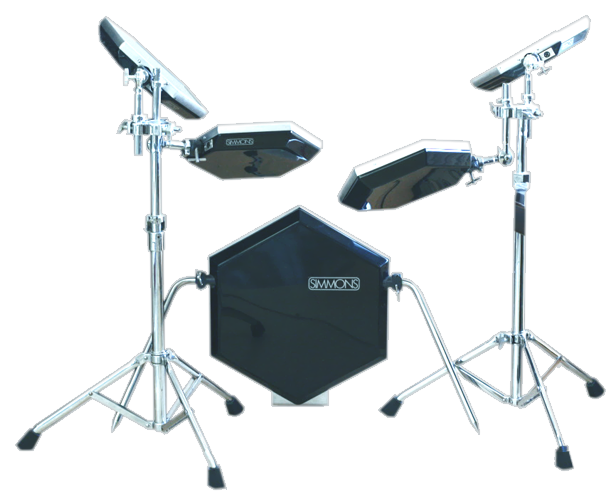 You probably already heard a Simmons drum synth without even knowing it... wondering what was used to produce that huge drum sound?

The Simmons hexagonal shaped Electronic drums were all over the place, on countless records and live shows during the 80s , used by artists and bands like Genesis, King Crimson, Jean Michel Jarre, Prince, Herbie Hancock, Pink Floyd etc...
The sound was not especially realistic but it was not the goal...the goal was to be huge and versatile.
Invented by Dave Simmons, the most famous drum brain called the SDSV or SDS5 was a drum synthesizer, bringing synthesis into the drummer's hands.

Often used abusively to generate only those pewww pewww tom tom sounds, the SDSV module produced a wide range of sounds. With a great punch and sensitivity, a truly unique and cult sound, it can be used for almost everything. The SDSV successor called SDS7 bring some digital low-fi samples in the game and a bunch of additional features like bend direction or FM modulation for a broader range of possible sounds.

The SDSV is a historical piece of gear that has a place in the sound of the 80s and is still used today as a secret weapon.
Only around 5000 of these things are out there so don't count on finding a working one easily or for cheap.
The machine was made by a true innovator. As there were no accurate VST for this legend out there...

I had to make the VSDSX and draw additional features upon a perfect recreation! This is dedicated to Dave Simmons.

The VSDSX VST, which stands for Virtual Simmons Drum System Extended, provides the closest experience to the real thing, for each voice or as it was called (module) it models accurately the analog character of the sound generation, internal circuitry tuning, trigger sensitivity and all the details you can find inside the dedicated manual. for its hybrid voices (HIHAT, CYMBAL, PROM & CLAP are analog but also EPROM based) clocks and counters that read EPROM memory inside a variable sample rate system is perfectly emulated. DAC decodes and output EPROMS data in real-time etc.
It models the SSM2044 filters with fine tuning control over lots of internal circuitry resistors. CV, trigger shapes, and VCA response can also be tuned to produce a wide range of sounds and punch/response, this also emulates how the module will react if triggered with pads or sequencer...
Separate outputs for your DAW, velocity handling etc...You will obtain that legendary powerful analog punch! On top of the cake, one voice can load your own external EPROM image data like on a real SDS1 (EPROM based) pad...This opens up onto a whole new range of sound, still being processed by the circuitry.
VSDSX is now in version 2 and features among other cool things a perfectly emulated Simmons Digital ClapTrap module, a secret weapon which combines a variable sample rate digital source combined with a pitched analog noise, an original feature of the unit was to never produce the same sound twice. Although it is integrated inside VSDSX a dedicated plugin with stereo widening capabilty is provided as a bonus.

VSDSX provides a huge synthetic drum sound by itself and can also be used with great efficiency in drum layering. Parameters automation and modulation can turn this thing into a crazy an creative sound source

Using it for layering with VPROM VST can really bring a nasty funky sound which combine analog and early digital! 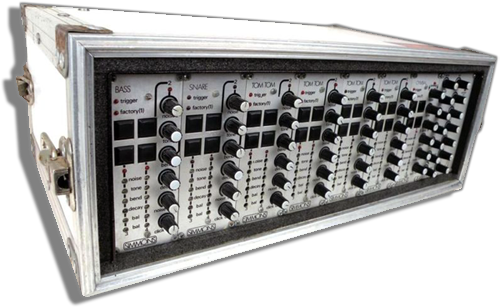 Coming as a bonus with your VSDSX 2.0 package, a perfectly recreated ClapTrap plugin with additional stereo capability 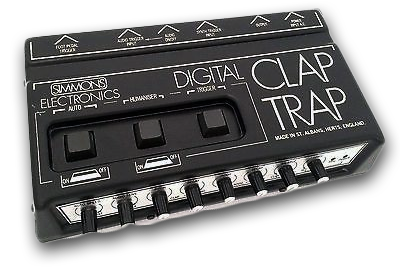 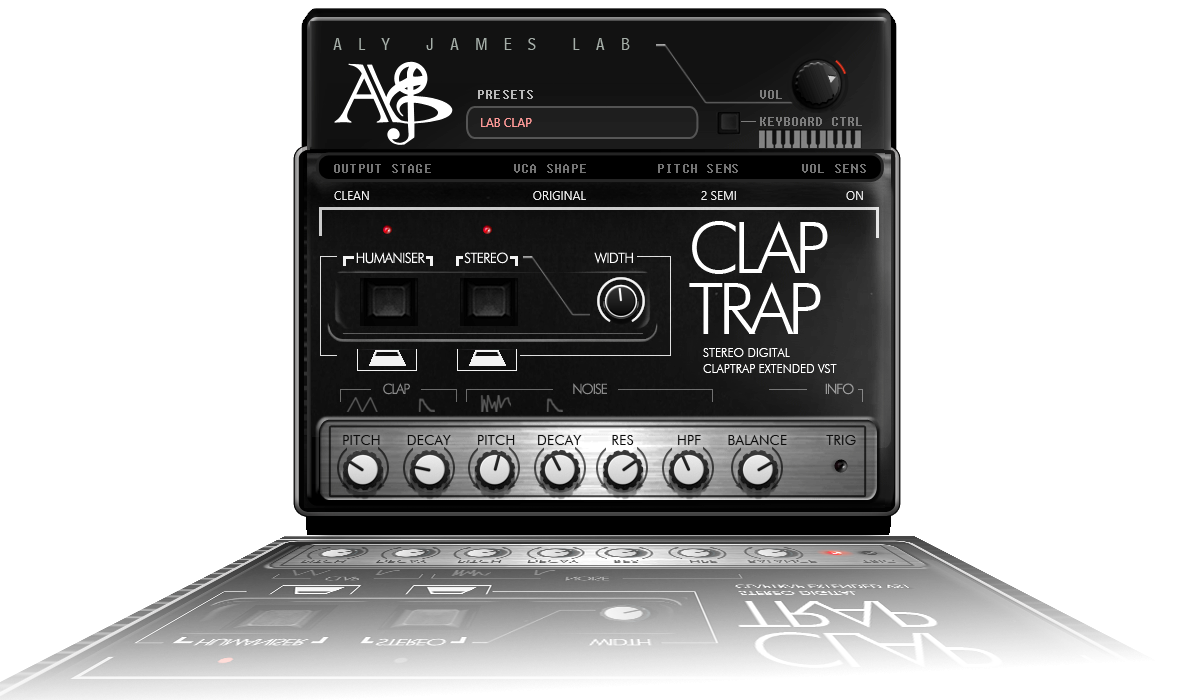 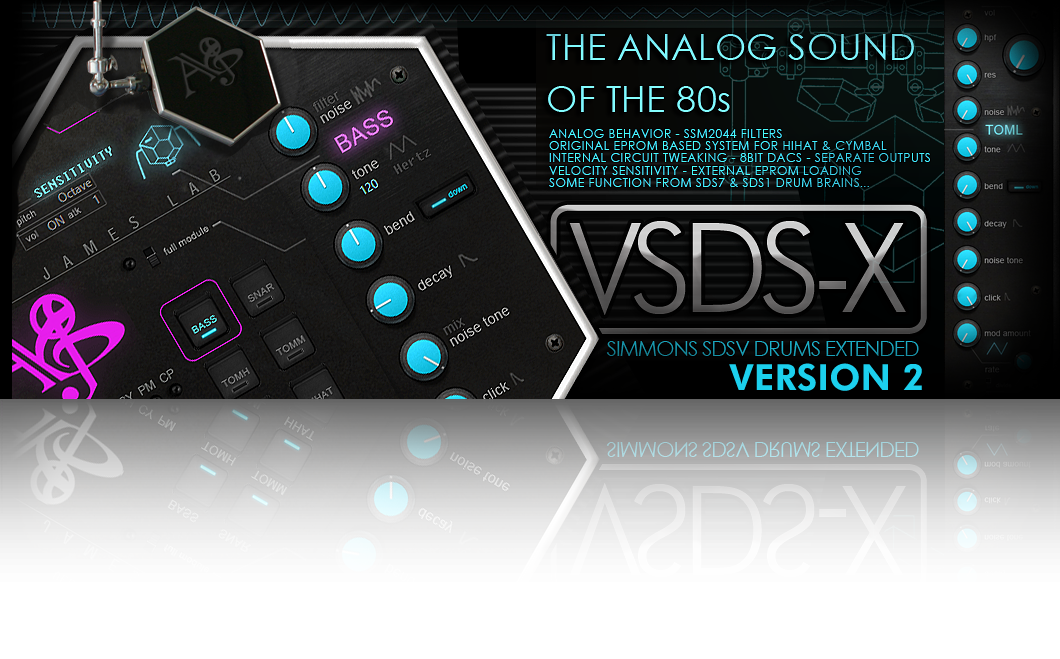 The special tone character of the drum synth is mainly caused by the raw analog waveform generation and by the circuitry itself, it generates harmonics that are normally not present in an ideal triangle waveform, VSDSX emulates that behavior and also models the analog clipping that occurs when pushed hard. You can also switch to a clean mode which will behave like an ideal system without OPAMP bandwidth limitation (more highs). These features alone offer a great versatility for sound design. A custom mode can switch all oscillators from the typical Simmons shape to a Sine shape that can be used if you would need less harmonics

The sound source of the drum synth was mainly a mix between a triangle oscillator and a transistor based noise generator. The way it was initially connected could be tuned for more or less frequency content. Each voice has different configuration and VSDSX offers user control over the internal noise filtering (especially useful on the snare voice card).

A lot of the circuitry parameters can also be fine-tuned, CV and VCA response, Trigger types (that will mostly impact the click attack generator time) etc.

The noise source was filtered by an SSM2044 lowpass filter chip, the filter acts on the noise and click part and behave differently depending on the voice, on bass & toms the resonance resistor was usually set to no resonance, but this can be tweaked inside the VSDSX if you want.

One of the obvious things that must be there in a drum synthesizer is a pitch envelope to simulate the behavior of real drums. The SDSV module featured a bending down effect that can be set to more or less amount of bending. VSDSX also features a bend up option and an optional FM modulation taken from the SDS7 module, the LFO can go from very slow to audio range modulation and can be optionnaly controlled by velocity.

The VSDSX have dedicated outputs for every voice like an original SDSV + PROM and CLAP modules.

You can choose from ALL to 1 Stereo Channel or Separate Channels for each voice.

The drum synth is highly sensitive to the power of which a pad or a key is hit, VSDSX gives independent access to sensitivity tuning for each voice, the pitch of the tone, VCF cutoff, click trigger etc...You can also disable the volume velocity tracking and only set a pitch sensitivity which gives access to a similar feature than the "run generator" found in certain Simmons Systems.

The GUI features all the SDSV controls (with the same weird naming :) ) but can also give access to a full module display with more in-depth controls, most of the parameters can be MIDI learned and controlled by an external MIDI Hardware or automation.

By default VSDSX triggers are mapped to the MIDI GM standard but you can customize it to your liking using its MIDI learning function. The map can be saved globaly and will be recalled everytime.

The VSDSX provides one voice which is based on the mighty Simmons ClapTrap, finely tuned against an original unit it reproduce the digital circuit, EPROM looping, Human feature and pitched noise source.
The original VCAs got something between an exponential and linear behavior useful for those almost gated claps, VSDSX adds a more pronounced exponential option, slightly increased tuning range on the low side and also provides an entire dedicated plugin if you feel like clapping someone's face with stereo widening capability using two emulated voices running with EPROM clock and filter offsets.

The VSDSX provides one voice which is EPROM based (like SDS1 or SDS7) the imported original EPROM image(sample) will benefit from the bend and noise mixing feature with that crunchy 8bit sound.
Load your own custom made EPROM image. EPROM format is the same as VProm (U255 companded) for easy compatibility but it can also now load Linear PCM format(most of Simmons original EPROMS were Linear PCM).

LOAD & SAVE FULL PATCH & BANKS in many formats (additional technical info in manual.)

ABOUT THE ORIGINAL HI-HAT & CYMBAL CARDS

The Hi-hat & Cymbal modules were pretty rare and unique sounding, mostly they were sample based, same configuration for both cards, but in a very particular way.

Honestly, the metallic waveform has nothing to do with a real hi-hat or cymbal sound, you can hear its looping and the raw 8bit character, but: This is a CULT sound! If you play this with bending up or down while toying around with noise and filter, you get these famous cymbal sweeps!

Velocity can also act on the sample rate and it sounds pretty original.

Memory was expensive at that time so you cannot store a long sample and be cost effective.

So Dave Simmons looped the short sound stored onto a 2732 EPROM, a trick also used by Roger Linn in the LM-1 but this time, the sample is read forward then backward.

The loop plays all the time inside the SDSVs digital modules and only VCA and VCF are triggered, this configuration opens up to very long decay settings.

The 555 Timer is the clock which set the speed of sample reading, the CD4516 are the counters and the CD4013 is changing the readout direction once counter reach the end. 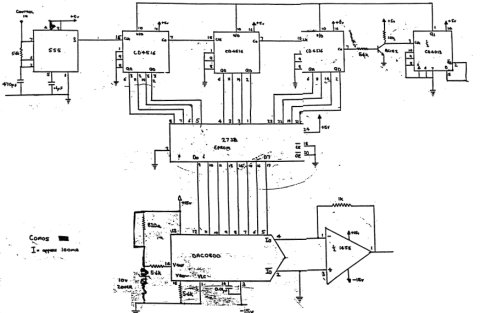 The original SDSV schematic and a lot of useful documentation found on the great simmonsmuseum.com website were priceless to design VSDSX VST. 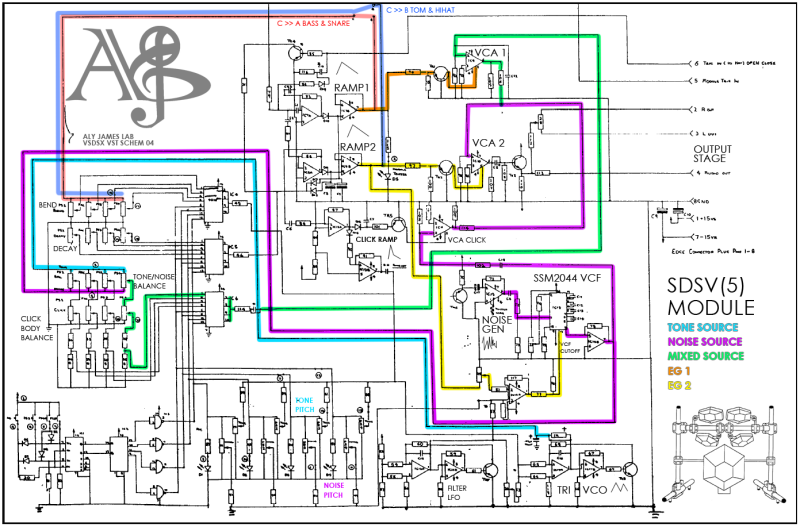 Windows 7 to 10 and higher, 64bit host, plugin provided formats are VST2 and VST3.

AU is Apple s proprietary audio technology, part of the Core Audio provided by Mac OSX. It is part of the operating system so it provides low latency and system-level support for the interface. Most DAWs developed for Mac OSX support the Audio Units interface due to its stability and system-level solutions (which also means faster processing). Apple Logic only utilizes Audio Unit format plugins, but other DAWs such as Ableton can also use these.

One or two DAWs like for example Cubase do not support Audiounits directly yet but you can still easily load an AU plugin with the help of a VST host plugin, some popular solutions are DDMF Metaplugin or BlueCat's Patchworks, a popular free one that recently got open sourced is KUSHVIEW ELEMENT.

Avid Protools only supports its proprieratary format AAX at the moment but you can still easily load an AU or VST plugin with the help of a VST/AU host plugin, some popular solutions are DDMF Metaplugin or BlueCat's Patchworks, others might be available that I am not aware of yet.

32bit is not supported ATM

Get amazing details about the Simmons SDSV Drum Brain and master the VSDSX! 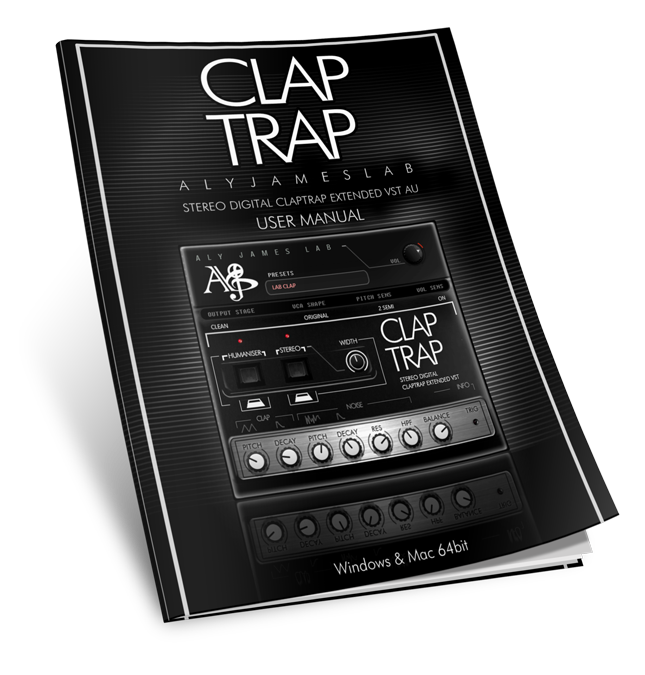 Owner of version 1.0 wants to upgrade?

You can check your current version with a right click on the GUI.
Updates for VSDSX VST are free until version 3.0

Get VSDSX v2 for Windows & MAC

VSDSX 2.0 comes with both Windows & Mac Installers and Manual


Thank you for willing to buy VSDSX.
You will support me to make the creation process going on and make those musical ideas alive!

Once your payment is accepted you will receive an Email with instructions and the VSDSX software link within 3 days Max, usually it is 24h.

Be sure to authorize incoming Emails from info@alyjameslab.com and alyjames.info@gmail.com in case they would be blocked by your spam filter.

The software will be registered to your Paypal account name.